The MANUU administration’s action is unjust & undemocratic, Should be rolled back – SIO MANUU 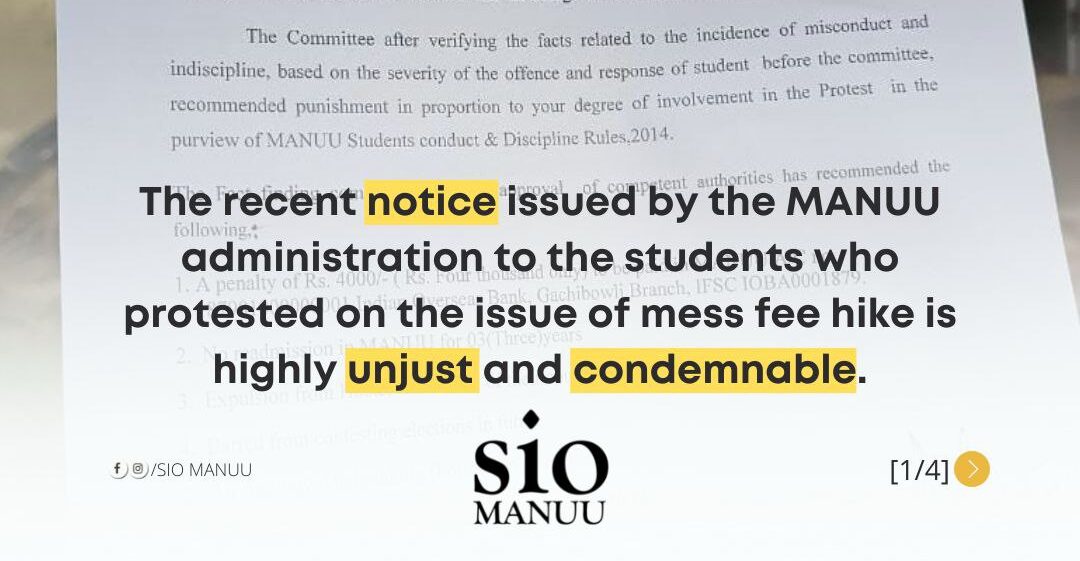 Hyderabad: “The recent notice issued by the MANUU administration to the students who protested on the issue of mess fee hike is highly unjust and condemnable” Said SIO MANUU President in a press note condemning the action of Maulana Azad National Urdu University’s administration which is taken against the protesting students.

University campuses are democratic spaces where all voices of dissent should be heard and entertained accordingly. The protest that happened on the 6th and 7th June 2022 was nothing but the immediate response of the students on the issue of the mess fee hike. The administration failed to deal with the issue properly and address the genuine concerns of the students.

We believe that dissent strengthens democracy and peaceful and democratic ways should be adopted for protests. Closing of the main gate was unfortunate and as result show cause notices were served to some students immediately after that protest. But again charging the heavy fine on the students, prohibiting their admission to the University, expelling them from the hostel, and barring them from contesting students’ union elections shows highly undemocratic behavior of the MANUU administration.

We demand that these office orders should be rolled back with immediate effect. Also, we ask the MANUU students’ union to immediately look into the matter and stand by the students.

← Prev: “Know him, you will love him” SIO Telangana launches Know Muhammad (PBUH) Campaign Next: Minority Education - A round table meet organised by SIO Telangana →