Composite Culture Developed in the South, but not in the North, Says Ex-VC of Osmania University 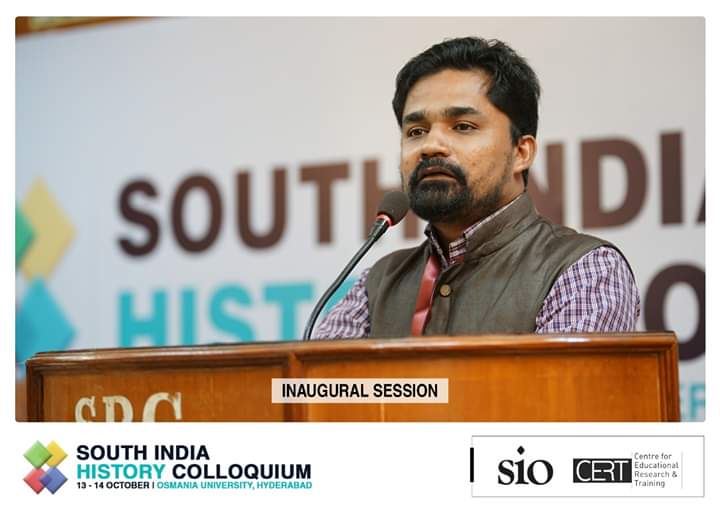 Composite culture developed in the south, but not in the north. The history of muslims dated back to 1300 A.D in the deccan region, said Prof Suleman Siddique (Former Vice Chancellor, Osmania University)

Hyderabad: First day of South India History Colloquium which features experts, historians, professors and researchers from across India saw divergent views on one platform. The Summit was organised by Centre for Educational Research and Training (CERT) in collaboration with Student Islamic Organisation of India (SIO) and was aimed to contemplate at historical perspectives and issues plaguing the marginalised communities.

In his opening address Br Labeed Shafi, the President of SIO while highlighting the theme of the summit said “The indian history is being changed in a systematic manner. The history and cultures of south india are diverse.Under these serious circumstances CERT has held a program on this important subject due to the need of the hour.”

Prof. Suleiman siddiqui said “Muslims did not come to india because of Mohammed bin Qasim but had already arrived in the country during the time of the noble prophet pbuh in kerela and performed trade here.
The difference between north and south is that in the south the hindus and muslims lived side by side in peace with each other and hindu kings provided the muslims with opportunities for trade. While in the north, there was always a raft. A war for the government always pursued in this region. A war which Mohammed bin Qasim also saw an opening and took part in.”
Composite culture developed in the south, but not in the north. The history of muslims dated back to 1300 A.D in the deccan region. The Nizams contributed millions of rupees to several temples, mosques and universities.

After the inaugural session three more Sessions held in with following themes
Community histories of south India, History of annexations in South India, Countering the Distortions in Historiography and Community History of South India