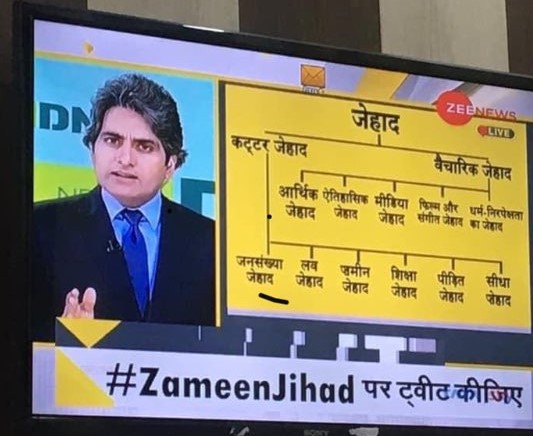 SIO Telangana has requested DGP Telangana and CP Hyderabad to register FIR against a ZEE News Anchor for hurting sentiments & for spreading communal hatred. Following is the complete letter.

Zee News’ Hindi media platform published a video claimed to be the ground report on buying of lands in the region of Jammu, India. The video was published on its official Twitter account @ZeeNewsHindi anchored by its Editor Sudhir Chaudhary who operates his own twitter account @sudhirchaudhary.
The same video was broadcasted on its TV broadcast on 11th March 2020.

Sir, this ill conceived report uses a term “#ZameenJihad” attributing to the Muslims who bought the land in the said region to be “waging a demographic war”!
This is a clear case of propaganda targeting the Muslim community. Such propaganda in the name of news and the usage of religious terminologies which must be seen in a specific context of the religious scripts, the channel is indulging in creating fear of Muslims in the non-Muslim people of the country, further propagating the hatred and distrust among communities. This is a serious threat to the law and order anywhere in the country. If such propaganda is allowed to flourish, the precedent it sets may as well be utilized by the anti-social elements and pitted against the communities elsewhere as well.

Hence, we, the people of India, request you to please register an FIR against the anchor for hurting sentiments, spreading fake news, spreading enmity between different groups and spreading communal hatred under relevant laws.

← Prev: A SHAMEFUL ACT OF TELANGANA POLICE IN NIZAMABAD Next: SIO Telangana welcomes the Telangana Assembly resolution against CAA/NRC/NPR. →